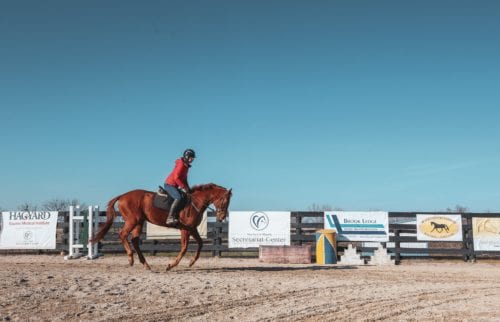 19 Mar What Can Thoroughbreds Do After Racing?

Thoroughbreds are known for their prowess as racehorses but did you know the breed can compete in nearly any equestrian discipline? Below you’ll find just a few of the activities off-track Thoroughbreds can do after they leave the racetrack and why they are so good at them.

Thoroughbreds are exposed to a lot of different things while racing – from big screen televisions flashing during the races to loud tractors. Because of this, they have seen nearly everything, and most things you encounter on the trail will seem like no big deal to these horses.

“He by far was the easiest horse I’ve ever had the pleasure to work and train,” said Ashley Rusch of transitioning Maker’s Mark Secretariat Center graduate Peace Cry to trail riding. “His willingness to please was impeccable, he was incredibly smart, and a very quick learner. He was also extremely curious, which made him an amazing trail horse! He was literally scared of little to nothing. He would rather ‘inspect’ something new instead of spook at it. He trusted me as his confident leader and we made an excellent team. Trail riding was a piece of cake for him and I to transition to.”

A sport that has taken place for thousands of years, mounted archery is a popular activity and one that Thoroughbreds can enjoy. Speed is needed, as is a horse that will listen to subtle commands from riders. While learning to have no rein contact can be challenging for the horses–since they have to complete the course with only guidance from their riders’ legs–it is something they can learn.

“The most important part of the training is being able to let go of the reins, this is hard for him because he is use to having constant input from the reins and becomes unsure of what to do when it isn’t there,” said Thomas Rice, who is training his OTTB Shathoor in mounted archery. “Shathoor is very willing and loves to explore, he likes to jump and run. I think Thoroughbreds are great in any discipline, their willingness is the best reason to ride one.”

“I’ve seen Thoroughbreds barrel race and they are incredible! I believe they excel obviously because of their speed, but also because of their hearts,” said Rusch, who also competes in barrel racing with Peace Cry. “Their willingness to please is phenomenal. They will do anything you ask and try their hardest to do that task. Their athleticism is also an obvious perk to running barrels. When taking your time in training and utilizing all the right tools, Thoroughbreds can become top barrel horses.”

“In fact, one of the top barrel racing sires is a Thoroughbred – and the Thoroughbred breed helped created Quarter Horse breed of today…”

Thoroughbreds ability to run as fast, in addition to their talent for jumping and their experiences seeing the unusual at the track, make them great fox hunting partners. In addition, their breeding for stamina makes them a great mount for a day out in the field, whether walking or galloping over a variety of terrain.

“Thoroughbreds love to hunt! They love running in a group,” said Deb Barnes, who fox hunts on her Maker’s Mark Secretariat Center graduate Photo Shoot. “They love to jump and are excited about the sport. I have never used a heel, only brakes! I like Thoroughbreds for fox hunting because they are athletic and tireless. My current counter is a Thoroughbred and he never tired in the field, eagerly takes all jumps, is agile and willing.”

Many racing jurisdictions have rules on how long a horse can race if he hasn’t broken his maiden (won a race) but it isn’t unusual to see older horses successfully running in the lower levels of racing. Many horses will also transition to steeplechasing as they get older, finding success racing over the jumps long after their flat racing days. You can find siblings from many successful horses in this type of racing, including a full brother to grade 1 winner Point of Entry.

While Thoroughbreds are thought of as a breed that just has running on the brain, their sensitivity also makes them great therapy horses. They have been used in hippotherapy to helping war veterans recover from post-traumatic stress disorder and everything in between.

One such horse used for this is stakes winner Speak Logistics, who was adopted from New Vocations in 2017.

“His career is just beginning, and he will serve as a co-therapist in our program, and clients will be interacting with him as we do activities with him to explore mental health issues, and career/personal development. There will be no riding involved with Speak, but more experience-based activities with him,” his adopter Jorge Roman told America’s Best Racing in 2017.

While some Thoroughbreds find a new career in the arena or on the trails, some Thoroughbreds may not leave life at the track after they retire from racing. Those who transition to a new role on the track are often called pony horses or outrider horses and their jobs are to escort current and future racehorses to the track in the mornings and afternoons. You will often see “ponies” in the post parade escorting the horses or out on the track watching training in the mornings. Some famous horses who became ponies after their racing careers were over are Chindi, Lava Man, and Perfect Drift.

If you’ve been to any major city, you’ve probably seen a policeman riding a horse. Did you know that some of those mounts are retired racehorses? In fact, they’ve even helped at big events such as the Super Bowl. One Police horse, SSO Valor (registered name: Raja’s Best Dancer), has helped with crowd control at a Super Bowl, a Republican National Convention, and is used in a program helping at-risk kids as well. He was awarded the The Jockey Club Thoroughbred Incentive Program’s Thoroughbred of the Year Award in 2017.

Thoroughbreds have been used successfully in eventing for decades with their speed and stamina playing a big part in both the cross-country phase and being able to compete for three straight days in three very different disciplines. Some famous OTTBs currently competing in up level eventing in the U.S. are Donner and Blackfoot Mystery.

“You’ve got to analyze our sport. Our sport’s a triathlon. Really, the make and break of the sport is the cross-country day, that’s where the competition is won and lost. You’ve got to stack the laws of probability more on your side. If you’ve got a Thoroughbred that is bred to gallop a long distance at high speeds the chances of you getting around cross country unscathed is much higher than a big, fat cart horse from Europe,” Olympic eventer Boyd Martin, who rode Blackfoot Mystery at the 2016 Olympics, told America’s Best Racing.

Thoroughbreds have played an active role in not only developing the discipline but also still competing in both hunter and jumper classes around the country. Some of the top all-time hunters and jumpers were Thoroughbreds, including the famous Gem Twist and Touch Of Class, both members of the Show Jumping Hall of Fame.

You can see the training a racehorse goes through by booking a tour to Keeneland or Blackwood Stables and then see the aftercare and training that goes into them after they retire at the Kentucky Equine Adoption Center or Maker’s Mark Secretariat Center. If you want to see the work that goes into a show horse, Horse Country’s tour of Spy Coast Farm will give you a good idea of the training regimens of high-level show horses.

While driving isn’t a discipline often associated with Thoroughbreds, they can also take part in this activity. The versatility of the breed makes this no problem, and as long as the horse is willing to learn voice commands, there is no reason they can’t give this a try. In the 2018 Thoroughbred Makeover, Amy Lent and Second Stride grad Delightfully finished sixth overall in the freestyle division while driving.

What is the Thoroughbred Aftercare Alliance?

You can find out more about the TAA at www.thoroughbredaftercare.org.